Today is a rest day, and I’m trying to especially make a point to rest and ice my back. Except for the part where I spent the morning sweeping and swiffering the floors and vacuuming the bedrooms. That probably didn’t help my back any, but the house has to be cleaned.

Last night I made some shrimp tacos for dinner, with a side of rice. 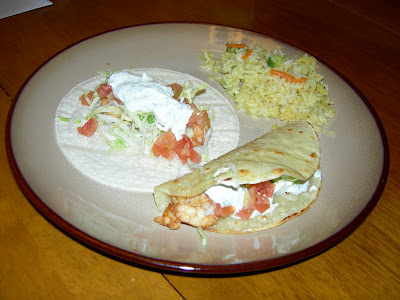 I actually got the recipe from a coupon book our grocery store sent out a few years ago, and it’s a keeper. The shrimp are coated in minced garlic, ground cumin, chili powder, salt, cayenne pepper, and olive oil and cooked. I like to use corn tortillas and I usually fry a few of them in olive oil and shape them into hard taco shells. We top the shrimp with shredded lettuce, tomatoes, and a cilantro-lime sour cream (sour cream mixed with fresh chopped cilantro, ground cumin, lime juice, and a little salt). I think the recipe is meant to be a summertime recipe, but we eat it all year round. I love shrimp!

I’ve been reading through my new issue of Running Times and there’s an article in it about getting the most from your GPS watch, written by Greg McMillan. When it comes to training runs, I am married to my Garmin. It doesn’t matter if it’s a route I’ve run 100 times and know exactly what distance it is. I just have to have that watch on my wrist. Oddly enough, I tend to run longer races (10+ miles) without my GPS. I usually prefer my timex stopwatch. I have no explanation for this. I can explain why I wear it in shorter races, though. When you’re running that hard, it helps to know exaclty how many tenths of a mile there are to go. It’s the only way I can convince myself to keep up the pace.

So here are the rules:

RULE No. 1: Don’t look
RULE No. 2: Let the pace vary
RULE No. 3: Don’t question the race distance
RULE No. 4: Don’t race the GPS
RULE No. 5: Leave it at home
Some of these are pretty self-explanatory. Rule number one recommends you avoid looking at your GPS watch for the first 10 minutes of your run. You should listen to your body and try not to force the pace you intend to run. Avoiding a peek at your watch allows you to gradually ease into your normal pace. Us runners are known to “stalk” our GPS and doing so at the start of your run can cause you to start too fast.
Rule number 2 also has to do with GPS stalking. If you’re constantly checking you watch, you’re going to drive yourself crazy when your pace varies thoughout the run. I actually keep the main screen on my GPS watch set to “average pace” instead of current “pace” because I used to drive myself nuts when my pace would vary as I climed a steep incline, hit a low point in a run, etc. Having it set to average pace helps me allow my pace to vary naturally. 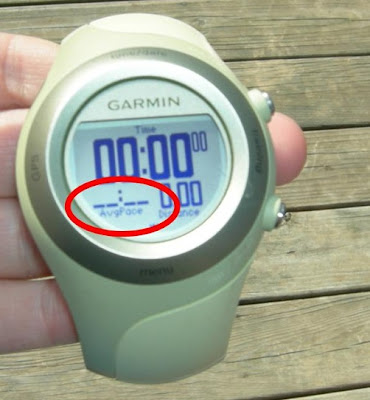 Rule number 3 is actually a pet peeve of mine. I hate crossing a finish line and hearing the guy next to me go “the course was XX tenths long”. Race courses are measured using equipment that is more sophisticated than our GPS watches. Plus I’m pretty sure certified courses are based on running every tangent, and I’m pretty sure most of us don’t end up running the shortest distance for the entire race. Now, that being said there is ONE time when you can challenge the race distance, and I went through this at a 5K last Thanksgiving. I crossed the line and my Garmin read “2.88 miles”. That was definitely not a 5K and I felt robbed of the PR I was shooting for, that I was on pace to achieve.
Rule 4- don’t race the GPS. Sometimes knowing your pace makes you want to go faster, but you have to remember what you set out to do for that training run. If it wasn’t meant to be speedwork, don’t make it speedwork, or you won’t get the intended benefits of the workout.
Finally, rule 5. The one I don’t do or if anything the one I do backwards. Like I’ve already said, I’m married to my GPS watch. I will wear it on every training run but have a tendancy to leave it home during longer races. I am capable of running by feel even with all of the information from my watch coming at me during a training run, so you’re probably not going to find me going Garmin-less during training. It’s a good idea, though. The article talks about running by your “internal GPS”, aka by feel, when you’re going out for a regular run that you’ve done dozens of times. And that’s a good idea, but if my route ends up being 0.01 longer than last time, I want to know! 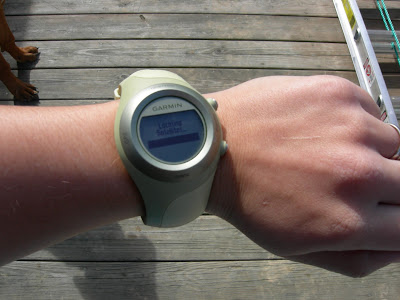 As Mr. McMillan puts it, get out there and locate some satellites!
﻿

This site uses Akismet to reduce spam. Learn how your comment data is processed.

"I've opted for fun in this lifetime" -Jerry Garcia

Hi, I’m Meagan! I’m a middle-to-back of the pack runner and I love running races. My favorite place to run is on the trails! I live in Southwest Virginia with my husband, and our two dogs. Aside from running, I love cheering on my Hokies, particularly in football!

“But as for you, be strong and do not give up, for your work will be rewarded.”